What does craft beer and nuclear magnetic resonance of aqueous silicate solutions have in common? Answer: Dr. Chris Knight, owner of Blind Pig Brewing in downtown Champaign. Knight is a two-time trailblazer of sorts for opening the first craft beer bar in Champaign and for opening the first craft microbrewery in the region. While blind pigs are an unremarkable sight, behold the Blind Pig Co. and Blind Pig Brewery for their selection of rotating craft beer, core and seasonal beer brewed up the street, English pub aesthetics, and a brand that continues to confuse the most savvy downtown wayfarers. Our staff sat down with Knight, a resident of Champaign since 1984, who started his story at his post-doctoral stint in the Chemistry Department at UIUC and opening the first Blind Pig in 1990.

Tell me about yourself.

Oh, I love talking about myself… I was born as a small child… (laughs)

What you need to know is that I came to Champaign Urbana in 1984. I had accepted a one-year postdoctoral position at the University of Illinois [at Urbana-Champaign], in chemistry. The reason that I accepted the position was because I thought Champaign-Urbana was Chicago. And, clearly, once I got off the plane, I knew that I wasn’t going to Chicago and this might have been a mistake.

But the other reason – seriously – that I took the job here was because the University is the best by far, head and shoulders, above any other institution in the world for the type of chemistry that I was doing, which was the nuclear magnetic resonance of aqueous silicate solutions.

This place grows on you. I never thought I would eventually be running a bar or a brewery in the middle of the Midwest — that was just absurd.

How did you get into the bar business?

After my post-doc, this beautiful building came up for sale in Downtown Champaign, where Cowboy Monkey is now. And, in the same week, I had a job interview in Puerto Rico.

At the time, I was ready for something different. I’d been doing chemistry for years and I thought there were other things to do. If I bought a building in downtown, then all manner of doors would open for me and I would be able to do something fun, right? What the h*** was I going to do: go to a tropical island or stay in downtown Champaign?

The same day that they offered me the position at the University of Puerto Rico, my offer on the building got accepted, so we got the building and stayed in Champaign. We couldn’t rent it at first. So we turned into a live music venue, and we didn’t serve alcohol. We eventually got a liquor license and sales went up. It was amazing!

So, you started a live music venue and bar, but you had zero experience in any of that. How did you manage?

It’s a very steep, very short learning curve. The thing that I remember most about it is that you have to go to work every day. When you run your own business, particularly a bar, you have to be there all the time. You must make sure that it looks presentable, know where the band is staying, and so much more… there is a vast amount of infrastructure that goes with running the business. It was really exhausting at first and all the stuff that was layered on top of it, like the fights that you had to break up, keeping the bar stocked, and paying a lot of money for a band that nobody shows up to see. You get accustomed to the constant stream of stress.

I eventually sold the bar in 1998 and left town to be a consultant in Santa Barbara. I did not regret the music side of it especially. I regretted the music side of it especially. But I missed the actual bar, hanging out there, joking with customers, and all that. I realized that running a bar was fun. And so I eventually moved back to Champaign after about two and a half years away.

When did you open Blind Pig Co. on Walnut, and then the Blind Pig Brewery on Neil?

I bought the building where the Blind Pig on Walnut Street is today, but this time we were not going to do live music. This was one of the first bars to serve exclusively craft beer (and PBR). “No crap on tap” was one of our slogans. In 2006, we opened the south side of the bar, which nearly quadrupled our capacity.

It was around this time that the indoor smoking [tobacco] ban hit, and we lost a lot of sales in the first few months. I mention this because another bar called the Barfly came on the market and it had a beer garden. Most of our customers smoked, so, I thought, let’s get a beer garden.

I also thought that we should open a microbrewery because every university town has one except for Champaign-Urbana. And so we opened the first one. We put in a two barrel system (one barrel is 31 gallons) and we could brew 60 gallons of beer. That’s more like a nanobrewery. It wasn’t enough or financially viable, but nevertheless, we were the first and only brewery in Champaign and people came out and they loved it.

There’s always been confusion about which Blind Pig is which. Can you share a bit about why they have the same name?

When I was thinking of other names for the new brew pub, we came up with some awful names. “Twilight Lounge” was the one that we were going to go with, but then I realized people would be talking about Twilight Lounge and not the Blind Pig. So, we called it the Blind Pig. Now we have two bars both with the same name within a block of each other, which confuses the f*** out of everybody.

How many different beers have been brewed over the years at the Blind Pig? What are some of your favorites, and most disliked beers?

We started serving beer in 2009 and we’ve done more than 500 beers. We recently started doing small batch beers again, which are 10-barrel batches – we normally do 20-barrel batches – and those get distributed quickly.

We also have six core beers: U of IPA, Blind Pig Reserve, Blue Pils, Set pHAZErs to Stun, Columbia Street Coffee Stout, and Curtis Orchard Cider. The core beers aren’t going to be available all-year round because we want to do more seasonal beers.

The Hattori Hanzo was a beer that stood out to me. It is a pale ale that is brewed with one type of hop, the sorachi ace hop, which gives it a lemon grass or dill flavor. That is one of my favorites.

There have also been awful beers, too! Three come to mind. One was a Frontenac Wheat, which was made with Frontenac grapes. There’s a reason you don’t use grapes in beer – it tasted dreadful! It took a long time to sell it.

Number two in the awfulness was our oat beer called Oaty McOatface after Boaty McBoatface. The only reason why people bought it was because of the name. It didn’t taste like anything, and the mouth-feel was akin to slime.

The single worst beer we ever made, in my opinion, was Oatier McOatface, which was made with 100% oats and was indescribably disgusting.

What can folks expect when they visit either of the Pigs?

Either one, you’re going to walk into an establishment that is comfortable, friendly, and that has a focus on craft beer. They are supposed to look like English pubs from the 1850s to the early 1900s, which is why you will see the bullseye windows and all of these beams. If you want to have a proper English pub, you can’t use an American building with high ceilings. English pubs, being much older, had lower ceilings. We wrapped them in Christmas lights because that’s fun.

We also do mug club at the Brewery on Tuesday and Wednesday and you can get $2 off select beersg, and we do trivia on Sunday. Outside food is welcome at both bars and dogs are welcome in the beer garden. We also sell package beer to-go.

Where else can people find your beer?

Almost all of the bars in Champaign have one or more of our beers. You can also buy our beer at supermarkets, Binny’s, Friar Tuck, and Hy-Vee across central and southern Illinois. 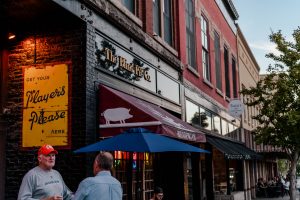 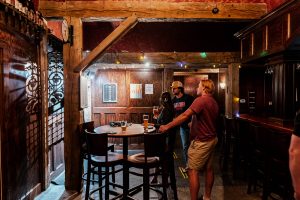