While it was the devastating blow of the 2020 Covid pandemic that brought her to Champaign, like a Phoenix rising from the ashes, Nicole Frydman of Uniting Pride of Champaign County was able to turn her life’s unexpected turn of events into a major win for the LGBTQ+ community. Growing from a volunteer for the virtual Pride Fest in 2020 to now presiding as the Director of Operations of the organization, in just a little over two years’ time, Nicole has been able to aid in increasing their June Pride festivities, added additional programming and increased their advocacy outreach to the outside community. With such a jam-packed schedule, we were lucky to be able to sit down with Nicole as she gave us the inside scoop on the inner workings of the UP Center and discussed what we have to look forward to for the new year.

What was your motivation for getting involved with United Pride of Champaign County.

When Covid hit, I was living in Chicago, and I basically lost everything when it came to sustainable employment. I was managing an art studio for a game design company and working as a performing artist but all at one time our studio shut down and all of my shows got pulled out from under me. My sister is a professor here and a single mom and she was in need for help with the kiddo. I came down to help for what we all thought would be, you know, six weeks…So here I was in Champaign and desperate for ways to feel like I could contribute, could participate, could help, and find things that would be fulfilling and interesting to me. I ended up seeing a Smile Politely post about volunteering to help with what would be a virtual Pride Fest that year (2020). After Pride Fest I continued to stay engaged and continued to work and volunteer with the organization. We brought Pride Fest back in person for 2021 and I was the chair of that committee but still volunteering at that point. Uniting Pride had some last-minute staffing situations going on and were looking for someone to be a paid consultant to help bring Pride Fest 21 to fruition and I was like, well, that sounds great. I like to joke that I tumbled backwards into life here. I never intended this to be where I would live but nobody expected what was going to happen in that year and I feel very lucky that I am here and have been able to have this position. 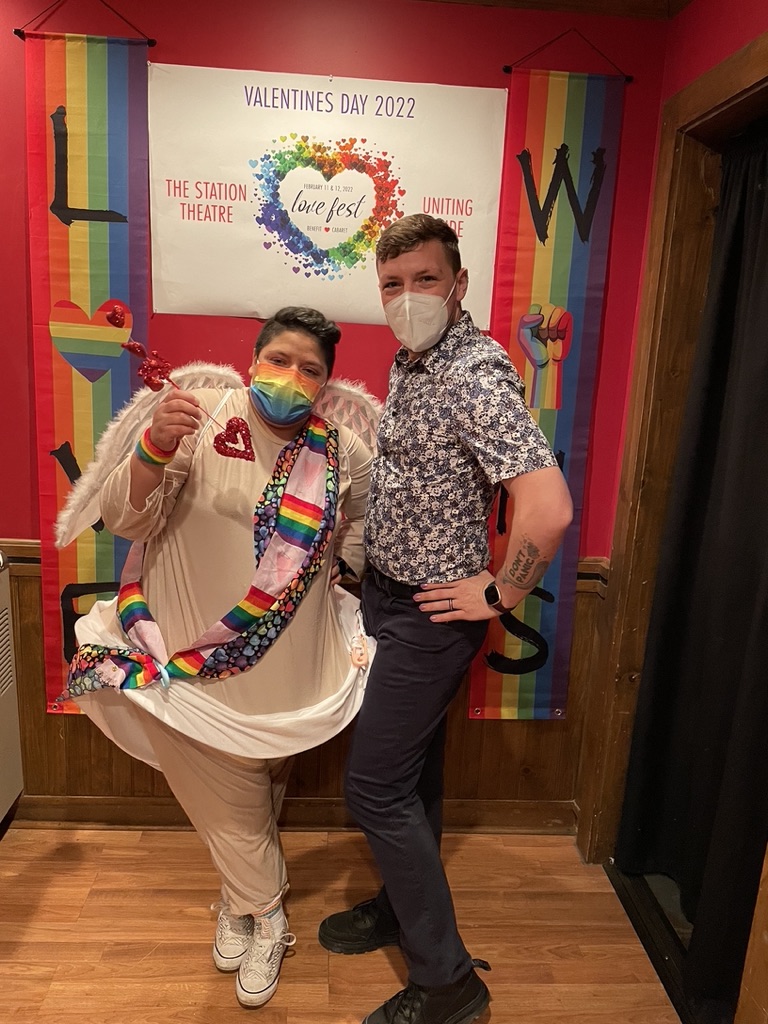 What areas of work does Uniting Pride have to offer the community?

We currently have four big buckets of work.  What we’re known best for is our events and programs. Folks may not know our organization’s name, but they know our signature program, Pride Fest. We also have a lot of other events that we do throughout the year that are lesser known such as our queer prom, which is for our local teens and has been around for a handful of years and it’s hugely successful. We also created a Valentine’s Day event called Love Fest, which was a huge success. This past year we increased our June pride programming significantly, and that’s something that we’re going to continue to do. There are also some programs that we’ve expanded or added this year. We now offer a small food pantry, and we have a free gender affirming clothing program that has really taken off this year in a massive way.

The next largest bucket of work is our support and social groups. We’ve had those for a very long time. They’ve ebbed and flowed, and they exist in response to what the community says it wants and what the community actually engages with. We have groups for pretty much all ages and various concepts, topics, and ideas. We love the chance to bring community to people in that way and give them support. Especially right now, considering the mental health situation of LGBTQ+ folks and understanding the level of attack that we’re under, with the Department of Homeland Security naming us as a target of domestic terrorism. Having the ability to create spaces where folks can seek solace and community and talk about what’s going on will continue to be a priority for us.

Another big area for us is education and training. There are a lot of people out there who want to be doing and saying the right things but just lack the education around it. We’re thrilled to be able to provide that. This year, we nearly doubled the amount of trainings we had been doing in the past. It’s lovely how many spaces are inviting us in to have these conversations and help people who are not part of the LGBTQ+ community understand the experience and how they can help or do better. There are still a lot of spaces we aren’t in, so we would love it if more folks would reach out to us and invite us in to do these trainings.

Then the last piece, and this is something that has been in response to a lot of what’s happening recently, is advocacy. We’d always done ad hoc response work to situations that come up, but we felt the need to more formalize that process and build some strategies around where our community needs us. Whether it’s an individual person or a family or on a large scale in relation to policies or, legal situations, school boards, or a place of employment that isn’t doing what they’re supposed to -whatever it might be -we feel like we’re now poised to better respond and help in a host of different ways. 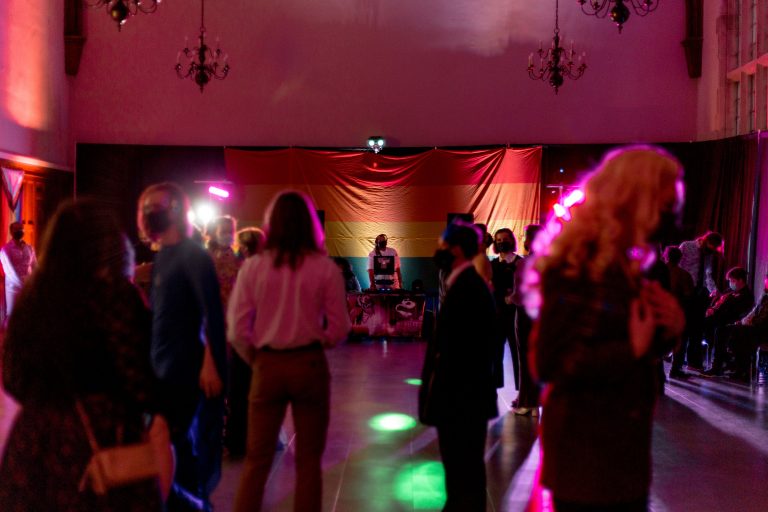 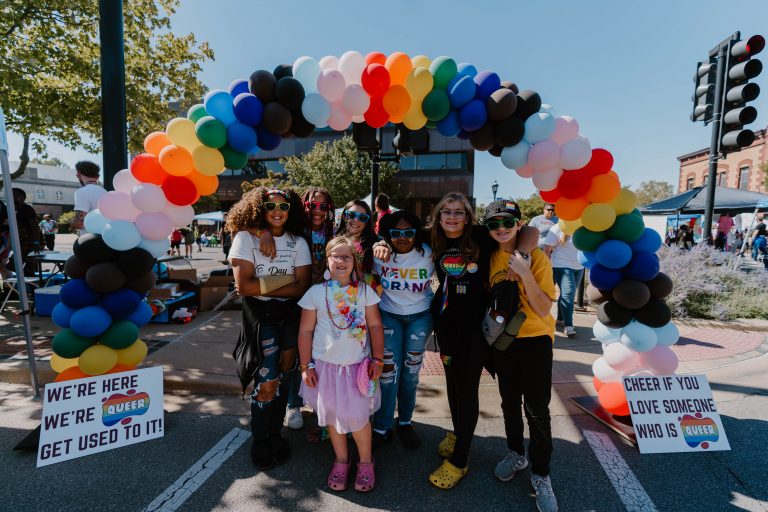 Can you share a story with us about a time when you witnessed the work of Uniting Pride impacting our community?

Last fall we were hearing about some pretty difficult bullying situations over at Edison Middle School. The parents (at Edison) engaged the school leadership, and we are very grateful that the school leadership reacted in such a positive way. They ended up bringing us in for six full days of training to reach each and every student in the school.

The feedback that we heard from some of the impacted students and families was that it had made a significant difference in the culture at the school and that the bullying was stopping. I mean, if that isn’t a success story, then I don’t know what is! Edison also just recently reached back out to us to come back and do it again, because obviously new students come in, while other students move on. It’s just really amazing that a school would make that kind of time and invest in that way because we know how complicated school schedules are. The number one challenge to getting into these educational institutions and making sure that we actually can reach them so is scheduling so the fact that this school has made this a priority and has made the time and space means the world to us, and we know it means the world to the kids. Bullying is rampant in schools and it’s not one thing, but when the students can learn about the impact and how hurtful it is, even if it’s around one area like LGBTQ issues, it tends to impact a whole host of issues for these young people in a really positive way. Which is just one more reason why this kind of stuff matters and why we’re so grateful when schools give us the opportunity to do it.

As I mentioned earlier, considering the expanded need lately, we have had to be on an aggressive growth plan. We need help. That’s the bottom line -we need resources. If folks are lucky enough to be in a position to give even a small amount, that could make a big difference for Uniting Pride and the LGBTQ+ community, because as I said we need the help. If anyone wants to throw us five bucks or, you know, 5 million, we’ll take it. The real bottom line here is this, we are at full capacity for what we can do for the community. Based on where our organization is now, we are not able to give any more than we are currently giving. The only way to grow our reach is going to be to expand our staff, which is a massively expensive thing to do. We are very busy looking for grants and foundations and places that want to support that on a substantial level, but consistent community support puts us in a position where we can feel confident that we could expand and maintain that long term. In particular, we have a monthly giving program and if somebody is able to give us even just 10 dollars a month that we can consistently count on, that’s the kind of donation that gives us the confidence to say we can hire another person and suddenly significantly increase the way we serve our area. We’re also looking for more volunteers. We’re expanding volunteer committees that currently exist and adding some new ones. With that in mind, we’ve got a recruitment event on Jan 25th at Cafeteria & Co. Anyone interested in learning more about ways to get involved can drop by anytime between 5-7pm and chat with folks who are already engaged and active. We hope to see folks there!